Rest in peace, sweet Julia.
I regret your suffering during this lifetime.
I am especially saddened by your pain.
You were always as delicate, graceful and fleeting as a frail, yet lovely, lily of the valley.
You will be forever remembered in my mind as that young girl that I called "friend" so many years ago. 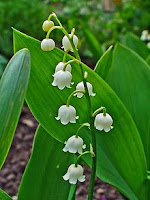 Image courtesy of Wikipedia
Posted by Teresa at 9:31 AM 3 comments:

Stranger in a Strange Land, For What It's Worth

Increasingly, I feel like a "Stranger in a Strange Land".
The War(s)
Tea Parties
Bi-Partisan Politics
Global Warming
Greed
The Seven Deadly Sins
You Name It
... the list seems to go on forever, ad infinitum.
A world full of people who seem to be growing exponentially self-centered, greedy and downright mean.
What has happened to the collective heart of humanity?
I am sickened by the broken heart of the population.

In the current climate, if one is kind, that person is generally perceived as 'stupid'. And believe me, there are plenty of people lining up to take advantage of the poor soul who demonstrates kindness.
What happened to Love, Peace and Understanding?
I, for one, am disgusted - and I am getting very, very angry.
On a personal front, I am angry about being spoon fed lies and dishonesty by people whose authority I constantly question.
I am angry about a few individuals stepping on a majority of people for the ultimate profit of a few.
I currently live in the state of Texas. Dallas, Texas to be exact.
I will confirm that I do not like Dallas, Texas.
I am not heat tolerant. I am not a Southern Baptist. I am not a Republican. I do not believe that bigger is better. I am not pretentious. I do not drive an automobile that is worth more than a house.
I am indeed a "Stranger in a Strange Land".
No worries, dear Reader - I am planning my escape to a more hospitable environment.
I simply hope to live long enough to locate and inhabit that environment.
In the meantime, I sit back and watch the Governor put a law into place that mandates a physician perform and force a patient to view a sonogram of her fetus before opting for an abortion.
I have to conform (and I do mean conform) to "rules and regulations" of two different Home Owner's Associations that have way too much power over real property. The organizations that I deal with have the ability to tell you to do anything that they please - or they have the right to put a lien on your home.
The demands of the "rules and regulations" constantly change, so the poor home owner is left with a moving target.
Conveniently, these organizations put 'straw (wo)men' and sheeple in place to confound any questions.
I have never been able to get a straight answer.
I live in a climate of fear in my own damned house!
I am indeed very angry.
It seems that not many United States citizens understand the Constitutional Right to Privacy.
I was browsing through some old books last night and found Abbie Hoffman's Revolution for the Hell of It. No matter what those of us who are old enough to remember thought of Abbie Hoffman, I could not help but wonder what he would think of the state of the world today?
Perhaps he knew what was to come. He took his life on April 12, 1989.
At Abbie's eulogy, Rabbi Norman Mendell reportedly said that his history of protest was 'in the Jewish prophetic tradition, which is to
comfort the afflicted and afflict the comfortable'.
If everything seems like a huge, money-driven Babylon, what can one person do?
I am open to suggestions - seriously. I want to do something - anything!
I stand ready to protest.
Bring the Revolution.
Does anyone care to join their voice with mine?
I want to stand against injustice and corruption.
I want to stand up for unity, love and honesty.
What is the worst thing that can happen if I stand up to the nonsense and evil that I see?
"They" will kill me?
To be silent is to die a million deaths.
I heard an old song today that seemed fitting: Buffalo Springfield's "For What It's Worth", written by Steve Stills in 1967.
He had the right idea.

I think it's time we stop, children, what's that sound
Everybody look what's going down

What a field-day for the heat
A thousand people in the street
Singing songs and they carrying signs
Mostly say, hooray for our side

Paranoia strikes deep
Into your life it will creep
It starts when you're always afraid
You step out of line, the man come and take you away