Posted by Teresa at 8:58 AM No comments:

I have been compelled to write this post for a very long time. After a long period of hesitation, contemplation and finally, victimization, I am acting.
Here is a warning: this post may evoke strong feelings and may be considered controversial by certain individuals.
A little background music, please.
I grew up with extended family members that were not of the same faith. My immediate family was ridiculed for our chosen religion. We were a minority. My first exposure to organized religion was one of bitter righteousness. Clarification: the profession of righteousness while acting in a manner that was, to my mind, directly opposed to any of their righteous religious tenets.
If, at this point, you do not understand what I am writing about, let me throw this out there
"Judge not, lest thee be judged"
Now, I hear judgments ALL THE TIME from the religious types. And if you don't hear them, you are not listening, which may be a positive thing. The above is a loose quotation from THE BIBLE that the righteous religious ones thump on. Seems that it only applies to other people, not them.
What is the answer or the antidote to the negative aspects of organized religion?

It is the now famous answer, "I am on a Spiritual Path".

I do not know about you, but I have suffered more at the hands of these "spiritual" people than the right-wing religious radicals.

There. I said it. It is out there.

How about His Holiness, The Dalai Lama's brilliant quote, "My religion is kindness"? True for him. Not so true for many of the people that I have encountered in the past year who like to mouth it. Problem is just that - they talk it, they do not walk it.

True Story: I made a silly, meant-to-be humorous jab at a life-long 'friend' of mine on the Devil's workshop, Facebook, after a woman who I do not know interjected a comment in a conversation that three old friends were having. Well.....apparently, my absolutely stupid comment led to a prosecution, a conviction and a lifelong sentence of penitence.


The 'mystery woman' started private messaging me with all kinds of judgments, hateful insults, psychoanalysis of me and bile. She was so domineering that I deferred to her. Sensing a potential problem and volatile situation, I did not want to hurt 'my friend', so I just "took" it and offered no defense or rebuttal.
The uninvited messages continued, fueled with arrogance and anger, delightedly humiliating me.
This particular woman proclaims to be a Buddhist. Okay. ACT LIKE ONE. And guess what? Her "religion is kindness".
She certainly was not kind to me!
Am I not a sentient being?
My cherished, life-long friend, with whom I was in nearly daily contact, eventually dropped me as a 'friend'. My friend is also on a 'spiritual path'. I wonder where that path starts? Where does it go? Where does it end?
How about being kind, conscious and spiritual in PRESENT (REAL) TIME? Wow. There is a concept!
How about interacting with other human beings? Therein lies the true test in life. Can you truly evolve as a spiritual being in a cloistered environment or running off to an ashram in India?
Word! Life is hard because human beings disappoint and hurt each other. Being a hermit will not hasten your spiritual evolution.
I called 'my friend' last week to inquire about his well-being and to ask him what was wrong between us.
He did not answer the phone, but immediately replied by email in such a hateful, hurtful, rage that I literally vomited in my sink.
And I am clue-LESS as to what is wrong. My stupid comment on Facebook was not bad, nor ill-intentioned, or even contrived. It was silly. I mean, seriously, what in the heck is going on?
I am no saint, but I am imperfect (gasp!) and it greatly disturbs me to think that I have hurt anyone or anything.
I wish that I knew of my transgression(s) so that I could learn, evolve and get through my own life as best as I can.
What has transpired causes me much pain. I love my lost friend. Perhaps it was an illusion. I believed him to be the kind, gentle soul that I knew so very long ago. Perhaps he was under the illusion that I am the same, self-absorbed, thoughtless kid that I used to be.
I live in one of the most Bible-thumping, self-righteous, right wing places in the United States. Frankly, I now believe that I would rather deal with the religious types than the spiritual path types.
...and I cannot believe that I actually FEEL this way!

Do you think that I am pronouncing judgment? Aaarrrgggghhhh!! I am so very weary of self-examination!
At least the radical religious extremists are honest in the portrayal of their standards. No pretense. Period.
If you want respect, TO THINE OWN SELF BE TRUE.
If your religion is KINDNESS, BE KIND.
If you want LOVE,  ACT IN A LOVING WAY.
In Love, Truth and Beauty.........


This post is dedicated to Anonymous
Posted by Teresa at 12:22 PM 3 comments: 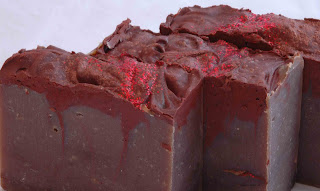 Dragon's Blood Resin
Both of these recipes are well-rounded with olive, soy, coconut, castor oils, a large helping of raw, organic cocoa butter (fair trade from Ghana) and a splash of coconut milk.

Dragon's Blood Resin has Red Reef Aussie clay and red glitter on top. The scent is derived from a blend of sandalwood, amber, vanilla, myrrh and incense. To my nose, it is a powdery smell.
The Spicy Lime Ginger is more ginger than lime and is more spicy than sweet. This beauty is colored with mica and sprinkled with raw, organic sugar.
May you always walk in Love and Beauty.....


http://www.etsy.com/shop/angelicsoap
Posted by Teresa at 2:00 PM No comments:

Just a short post here to show off my new, double-terminated, self-healed quartz "tabby" crystal.  The "tabby" is short for "tablet" or "notebook" and people who work with these crystals often say that they hold memories of past lives and the Akashic Records.

Supposedly, the Tabby Quartz is also excellent for divining intelligence about the future. 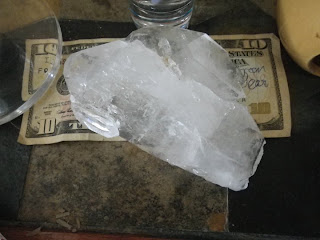 It is hard to miss the $10 bill that I have posed the beautiful crystal on! It helps to give you an idea of the size.

When I was studying  metalsmithing, I took some gemology courses. These courses were not geared to divination! In fact, I had no idea of what abilities and work that our gems and crystals are capable of until recently!

I knew the basics - rose quartz for love and the heart chakra. Amethyst for loyalty and sobriety. The gift shop kind of knowledge.


So, I am a novice about all of the magnificence in the above beauty - but I like what I see!

There are so many breathtaking gems and crystals! Staggering! For some reason, I have always been naturally drawn to the clear quartz.

What is your favorite stone, gem or crystal? Why?

I simply had to write a post about "Black Swan", the latest love-it-or-hate-it film that has several Oscar nominations.
In short, I did not love it.
"Black Swan" is billed as a 'psycho-sexual thriller' or some such nonsense. I found it to be quite the opposite.
However, "Black Swan" has disturbed me, albeit not for the reasons it should have bothered me.
It could have been a phenomenal movie. There are many underlying issues that are buried deep under the surface of "Black Swan". Not one of them was explored in depth.
Maddening!
Instead, "Black Swan" careens from one tense scene to the next, glossing over potentially deep and truly dark themes in favor of popular sensationalism.
"Black Swan" revolves around Nina, our heroine ballerina, who is a technical perfectionist and quite skillful. Nina's Ballet Master, believes that Nina does not 'lose control'. Ever. Nina's inability to lose control forms the film's surface focus.
I say "surface" because we never get to see what drives Nina to be so obsessively controlled.
That exploration could have elevated "Black Swan" to heights of greatness.
Ballet's rigorous training, discipline, ego, drive, stamina, the quest for youth and the continuous pursuit of the demon that is perfection must be hellish.
As with so many demanding fields, the final product  appears effortless and exquisitely beautiful to the audience. There is no trace of the grueling, all-consuming effort that gives birth to the creation.
The ugly side of ballet might be compared to the gritty side of modeling - the obsession with physical perfection and youth. In modeling, the human being is reduced to a coat hanger or body parts. However, a dancer is an artistic athlete. Just a little pressure, eh?
I have always felt a certain empathy and sympathy for anyone whose vocation is ballet.
For many years, I believed that my particular calling to be a metalsmith was tortuous. That is, until the reality of the world and lifestyle of  ballet was revealed to me.

For those readers unfamiliar with ballet, I would recommend researching George Balanchine, the Russian choreographer, co-founder and Ballet Master of The New York City Ballet. There are a few biographies on Balanchine, including  two excellent ones by Robert Gottlieb and Bernard Taber.
Indeed, George Balanchine  is credited with creating modern ballet, basing it on classical forms and techniques that endure to this day.
Mission: Perfection Impossible.
Therein lies the pervasive story line of "Black Swan":  the attainment of perfection, a subject very near and dear to my heart.  Hence, the byline of this blog.
As I write this post on St. Valentine's Day - which, by the way, I still believe is a real holiday that Hallmark merely exploited - I am thinking of perfection. I am thinking about love, specifically self-love.
The desire for improvement in this life can be noble.
My Father used to say that one should never occupy a place (a building, a workplace, a relationship, a neighborhood, a planet, a life, a space in time) without leaving it better for being there.
It is this standard to which I aspire.
Long ago, I was struck by the knowledge that I would never be able to make a perfect piece (metalsmithing). Now, this was a profound realization for a young artist in a demanding and competitive field. From that point forward, I decided to embrace and even emphasize imperfection in all of my work.
Several decades later, I know that unique beauty is found in imperfection.
Looking back, perhaps I have not given "Black Swan" enough credit.
Perhaps the Ballet Master was encouraging the heroine to 'let loose' in order to find that unique beauty which only shines through in imperfection.
Like most artists, I am my harshest critic.
I must love my personal and quite human imperfections for they make me unique.
That is a huge step....one that can certainly leave any space I occupy better.
Today, I begin my journey.

Images Courtesy of Wikipedia
Posted by Teresa at 8:33 PM No comments: