Some thoughts on Irish Ancestry

I have but two handwritten accounts of a portion of my family's paternal history. These dog-eared  and yellowing, brittle treasures have recorded only the paternal side of my family. It is a one-sided history at that, for there is no mention of my paternal grandmother, who died in the influenza epidemic.
I believe that the maternal side of my immediate family may have been researched and reconstructed by my dear brother, who claims that there were ties to Scotland (gasp!).
Mass graves, the destruction of public records, and the mists of time have swallowed most of the Irish ancestral history.
Growing up, I recall my Dad always wore a green tie on St. Patrick's Day.
Our immediate family never spoke of "The Troubles", or the "Irish Question" as the English referred to it, but my Dad grew up with dinner table banter about the topic. This is a fact that I did not discover until the late 1980s.
Above is a photograph that I took of O'Callaghan's Mill in County Clare. I went driving about Ireland in search of any clues to my Grandmother Fitzpatrick's family.  I stumbled  upon  O'Callaghan's Mill, a beautiful and tiny village in Clare which was settled by many Callahans after Cromwell 's bloody campaign.

Callahan means "The Contender".
Most people are content to believe that the Callahan stronghold was in Cork. I found out that the Callahans in my direct lineage came to America before the famine - a bit unusual - but perhaps not, considering the adventurous streak that I have observed in many members of the family.
One of my great Grandfathers, a cobbler, resided in Clonmel, a rather urban place that is situated in County Tipperary close to County Waterford.
It is believed this ancestor made the big move to America. 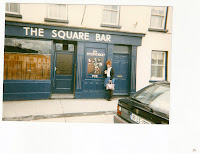 The above photo is taken at Fitzpatrick's The Square Bar in County Waterford...the closest clue that I found to my Grandmother's origins.
Above is a snapshot of the place in Ireland where I felt the most tugging on my heart strings, Connemara in County Mayo. Connemara is a rather wild, rocky, isolated place. I loved the entire Emerald Isle, but it is rugged Connemara that occupies my soul.

I sometimes wonder if I have any of the fortitude of my ancestors.
Ireland was stripped by England of religious freedom in the sixteenth century and was primarily a population of peasants - never far from the brink of economic and physical disaster.
In less than two years, two million Irish - one quarter of their entire population died in the 1846 famine. The land and the livestock were considered more valuable to the English than the inhabitants.
Visiting the picturesque and lovely Ireland today, one may not know the terrible history, except for the sightings of many mass graves and Celtic crosses.
The only things lovelier than Ireland are the people and the beasts. It is a magickal, ancient place that is in my blood, my heart, my spirit, my head.
Perhaps beauty is strength?
Thank you for indulging me in my rambling....after all, God made me kiss the Blarney Stone before I was placed in my Mother's womb.
But then again, perhaps we were singing in the shabeen, consumed too much poteen and this is all a dream...
This post dedicated to the Irish
who persevered in the face of English greed,
were greeted by signs of "NINA" in America
and survived - no, - thrived - in spite of it all
A short guide:
Tipperary is pronounced "Tipp RARE REE"
Smithwicks is pronounced "SMITH  ICKS"
NINA = "No Irish Need Apply"
shabeen = a covert, social drinking establishment, designed to avoid legal regs; 'poof! it has the ability to disappear when necessary
poteen = PUT CHEEN = home brewed liquor - white or dark
"The Luck o' the Irish" is sarcasm
"Paddy" or "St. Patty's" is considered to be terminology of insult
Posted by Teresa at 3:47 PM