A Blue Moon, an Eclipse and Brian Eno...

Tonight is the Eve of the New Year, 2010. It is an auspicious evening for cosmic types - it brings us a blue moon (the 2nd full moon in one month - will not be another until 2028 - is that right?), as well as an eclipse. YIKES!!! I will NOT be driving and drinking on this night!!

The Eve of the New Year usually means drunken debauchery, staying up until midnight, kissing strangers and celebrating 'out with old and in with the new'.

For many years, I lived in the city of St. Louis. I would hear handguns being randomly fired (usually announcing a crime, not the New Year) or pots banged with kitchen utensils at the stroke of midnight.

Firing weapons is the announcement of choice in my new locale. Friendly Fire. I hope.

I used to look forward to a New Year....but for many years now, I have felt fear. As a friend of mine used to say - "Wonder what train God is going to roll down my track?".....

I can tell you this, if it is a pleasure car, I want to knock all the women and children aside and jump aboard!

I am growing weary of all work and no play. And time grows short, my friends....

2010 means another birthday rolling around. Just don't know what to make of that....the older I get, the less I know. There was a time in my audacious youth that I thought that I knew many things. Oh - to have that self-confidence, or just plain youthful folly back! Ignorance may truly be bliss.

I will probably be fast asleep before midnight thanks to chemical assistance.
I am going to take a cue from my style guru, Jerry and adopt this haute couture look (below). I have already donned a similar ensemble in honor of the evening's festivities. I don't care if Jerry does have better legs than me! Dammit! I am wearing it! 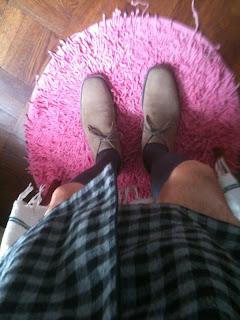 Lastly, I have been thinking about Brian Eno (who knows why?). He was one of my avant-garde, intellectual  heroes when I was in art school (happiest days of my life....the years ahead appeared to loom with infinite possibility. Clearly, I was delusional).

I recall his attractive cross-dressing in Roxy Music.

I owned "Music for Airports".

I read one of his scholarly contributions to an art anthology - something about the fusion of all art forms. It made sense at the time.

Here is a recent quote:

“I'm struck by the insidious, computer–driven tendency to take things out of the domain of muscular activity and put them into the domain of mental activity. The transfer is not paying off. Sure, muscles are unreliable, but they represent several million years of accumulated finesse.”

Hmmm....I do not know what to think about this - was it not Eno who was light years ahead of everyone in the music industry? Did he not get there via "technical wizardry"-  not by physically playing an instrument? He pioneered ambient sound and computer-generated visual and sonic art.

See? Just goes to show you - the older I get, the less I know. Told you so!

I want to take this opportunity to wish each and every one of you a safe and happy new year- actually, a new decade!!
I would also like to ask for the one thing that seems elusive - PEACE.

Let us each be the change we want to see in the world.....this is a widely quoted, but rarely practiced statement from Gandhi.