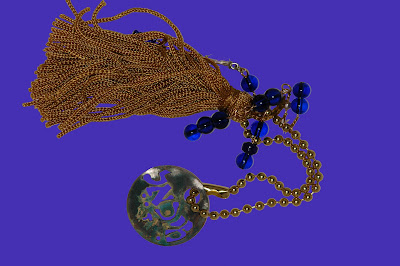 Above is an image of a prayer mala that I made for my dear friend and gifted Lightworker, Maria Peth. This is a bracelet mala that holds the sigil/seal of Archangel Michael. It is composed of patinaed brass, cobalt beads, brass and fiber. Archangel Michael's name means "He who is like God". He is widely believed to work with a number of angelic helpers who are rightly called "The Band of Mercy". It is for good reason that Michael is the patron and protector of police and  fire fighters. He is 'the Big Gun'! You can call on Archangel Michael whenever you need help in a seemingly impossible situation. Visualize his gorgeous color of cobalt blue to assist you in invoking Michael.
I think about another Michael a lot these days - Michael Jackson.
I was fortunate enough to see Michael Jackson perform in the 1980s. I had watched him from afar all of his life. I collected Jackson 5/MJ records, 8 tracks, cassettes and CDs. I recall being happy to have tickets to see him in St. Louis at the old Arena, but nothing prepared me for what I saw that night. Wow! Precision. Perfection. Magic. He danced as though he was skating on ice. He made it look so easy! I had never seen anything like it. I know that I will never see anything close to that performance again.

I have never failed to lose my respect for this man's artistic genius. He was a rare gem, a shooting star. Michael Jackson was a wildly creative, gifted talent who could see into the gap - see possibilities that the rest of us could not. And, thanks to the medium of video, Michael Jackson could give us a visual glimpse of his magic visions. Video? I will take it - but no one could beat a Michael Jackson "live" performance - absolutely no one.

I think about Michael Jackson these days in terms of his fear and his courage. When it seemed that most of the world turned against him, Michael Jackson kept pursuing his art. In my opinion, his strongest work was "Dangerous", largely overlooked and created in the midst of controversy. His work in the 90s and 2001 was the best of his long career! "Thriller"? Groundbreaking. Later work? Mature and polished. Definitely.

I think about Michael Jackson preparing for his last tour. I imagine that he felt crippling fear, but he, always the disciplined and consummate professional, persevered.
Some of Michael Jackson's work remains with the world. I think the world misses him. The world needs the performers, the magicians, the believers in Neverland, the artists. It is through these people that so many others in despair can be lifted up with the hope that life really is worth living - even if it is for a short time.

Michael Jackson has inspired me to work in my studio again. Plain and simple. My latest creations hearken back to my roots - a tad raw, but with a strong element of fantasy. When I was young, I sat in my family's living room, 're-purposing' my poor Mother's rosaries and jewelry. Sorry, Mom.

Thank you, Michael Jackson, for helping me overcome some of my many fears and letting me see that anything really is possible.....I had forgotten.